Review Time - The colours of Passion by Sourabh Mukherjee


The Colours of Passion
-  Sourabh Mukherjee

If the love for your partner is true, it may make you winch things to any extent. But then, when you’re not ready to show yourself up to the world, then…
Here is a bite over our weekend read, ‘The Colour of Passion’ by Sourabh Mukherjee.

“A monster, some called her.
But in the shadows, only
Said in whispers, she was
An Angel in Red”
-      Emory R. Frie

The mystery takes its course in this way;
The story opens with the death of Hiya Sen, who has set the fame and flame in millions of hearts. She gets killed after brutally raped by three persons. The trauma occurs ahead of her husband, Manav Chauhan, who is helpless being unable to save the life of his newly wed wife and himself. The plot of the story stitches from here, with ACP Agni Mitra’s acceptance to scrutinize the case with Inspector Arya.

On the contrary, even before Agni can connect the dots, a series of killings ensues, making him to think through uncertainty. At the end, when the killer whale is discovered, the reason behind it will leave you dumbfounded.

‘And unrequited love was always a dangerous motivation’ – Quoted from the book.

The portrayal of the life-style of the well-heeled, comparing with the background of the city, predominantly making the reader to doubt each character in the story to the crime has made the tale successful. The story, towards the end, put lights on yet another love, which the author has nailed it. ‘Who’s the serial killer?’ ‘What’s the reason behind his killings?’, when u find answers to these questions, you would be astonished just as me.

The author Sourabh Mukherjee has penned the tale in a lucid way. He has the dexterity needed to deal with a mystery, in a mysterious way. The gradual rise and fall in the tone of the story line has a great influence on subsequently developing secrets. The justification for characters, love carefully concealed behind the crime plot, with eye seizing one liners turning up now and then has made the story distinctive.

The Colour of Crime is Red, and so the ‘Love’ 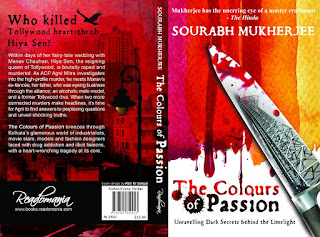